I’m a relatively new netball dad. I analyse the game as an outsider and there is one practice that is just so obviously bad but is done by everyone. It’s a practice that I have tried to discuss with the coach and others and they are all blind to it. But it is also a great example of how we respond to problems and the solution is often more detrimental than the problem.

So this blog is partially about netball but it is really about how we deal with problems in organisations. It’s a business post! 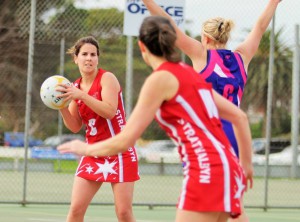 Netball is an excellent team sport. In other sports it only takes a couple star players to lift the team, but netball relies on a number of people for every point. It requires people to be in specific locations and then quickly move to new locations, to clearly communicate to the person with the ball, and for the person with the ball to reliably throw the ball to a player that is in position and in the clear.

The winning team (at least for the 12-year-olds) has the characteristics of running quickly into new positions and the ball moving smoothly from player to player. For players without the ball it is all about speed and purpose. For the person with the ball it is about choice and skill.

The problem is when the person with the ball makes a bad throw.

What are the causes of having no-one to throw to? A team the is slow to move, not getting into the clear, or crowding together is a major cause. The solution – move faster and move more. So what is required is for MOVEMENT.

What is the main cause for a bad throw? Often it is because the person is throwing as soon as they have the ball. They have failed to wait for a team member to break, or they haven’t actually got a clear target in mind. They are rushing. The solution is for the person to stop, think and then act. What is required is CONCENTRATION and DELIBERATION.

So what is netball’s folly? It is where the coach, parents and even the players start calling out “SLOW DOWN”.

They see the problem as the person with the ball rushing, and the solution is to slow down.

The reality is that the team that can move the ball the fastest is likely to be the winning team. The fact is that 9 out of 10 throws were incredibly fast and well executed, but the last one was poorly timed.

So by telling the team to “slow down” you are now telling ALL the players that had the ball to slow down. So now the 9 good throws will be slower, allowing the other team to defend better and forcing your own team to run more. Not good.

And then to make it even worse, as soon as the coach yells out “slow down” once, the parents take up the mantra, and soon every mistake made on the court is followed by a chorus of “slow down”.

What is needed is an instruction that actually addresses the problem. Something like “concentrate”, “focus”, or “look at where you are throwing it” directs the attention on the actual problem and the rest of the team can simply ignore it. It’s not an instruction to them.

The problem, however, isn’t limited to the netball court. It is a practice that pops up over and over again in business.

I came across a great example recently where staff were meant to be recording the daily minimum and maximum temperatures of their fridges (why bother when temperature loggers exist? The problem was that some staff weren’t doing it correctly and a training session was run for how to fill in the form correctly, and then it was policed. The problem was that one person was doing something incorrectly, but the response was to have the entire team focus on the paperwork. Meanwhile the more important issue – are the fridges at the correct temperature – was overlooked as they focused on “is the paperwork correct?”

Previously I worked in a software development team and we produced a huge amount of code in a very short amount of time. As a team we were incredibly productive. A number of problems started to occur. We were being driven by a business that continually changed what was required or the data that we had to work with, and each time they did that we had to redo a huge amount of work. The end result was that we were still working on projects long after we had said that we would be finished. There was also one developer who just failed to deliver results. So the symptoms were developers working on projects after their target completion date, and one developer failing to deliver anything.

The solution was to introduce reporting. Tasks were broken down into minutes, and fancy Gantt charts were updated. We had a daily meeting to update management. We had to send an email to management each morning outlining our tasks for the day, and at the end of the day we had to update a document with what we worked on. We had to enter our time into 3 different systems. In the end, the amount of time we spent explaining why we were running late became a major obstacle. Over 1/3 of each day was spent on paperwork. And this slowed things down even more and reinforced in management’s mind the need to police it more.

Here are my 5 tests for determining if a solution really a good solution:

1. Does it actually eliminate the symptoms?

2. Has it had a negative impact on other aspects of the business/game?

3. Is there an alternative solution that will have the same or better outcome for less effort or side effects?

4. Will it be practical?

5. Will it be sustainable?

In regards to this post, the second one is obviously the big question that we fail to ask. We are so fixated on the symptoms that we fail to see the side effects of what we are doing.

So true or not true? What has your experience been when groups try to address a problem only to cause other issues.

And for the netball fans out there, am I wrong?