Two temperature sensors side by side

When you see the two graphs they look like totally different locations: 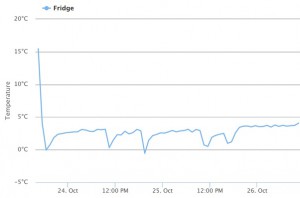 Which temperature sensor is correct?

The answer is “both of them”. They are both portraying what is happening within the fridge.

Then why do they look so different?

To understand why they look so different, it is critical to understand two concepts – response times and accuracy.

The response time is how long it takes to react to a change in temperature. Thermal latency is another term meaning the same concept.

Something with a fast response time will show changes very quickly and will tend to reflect the air temperature very well. They will respond to things like the door opening and closing as well as the fridge turning on and off.

Something with a slow response time will take much longer to show a change in temperature. It will gradually change with time. It is more likely to reflect the product temperature and not the air temperature.

Imagine a pile of feathers and a pile of bark. When the wind blows the feathers will quickly move in the direction of the wind. The bark will slowly move but it will take a stronger wind and they won’t move as far as the feathers. Both will move but one is incredibly sensitive to the wind.

But they are both meant to be within 0.5°C

The graphs, however, are different by not 0.5° but 5°C. Surely one of them has to be wrong?

And the answer again is, “they are both right”.

So both the Tempsen and wireless temperature logger would show the same temperature if they were given plenty of time to respond, AND as long as the temperature didn’t change.

The reality is that “accuracy” is hidden by fast changing temperature.

BUT it is possible to slow the response rate down by placing the logger in a box or bottle. It is not possible, however, to speed up the response time of a logger.